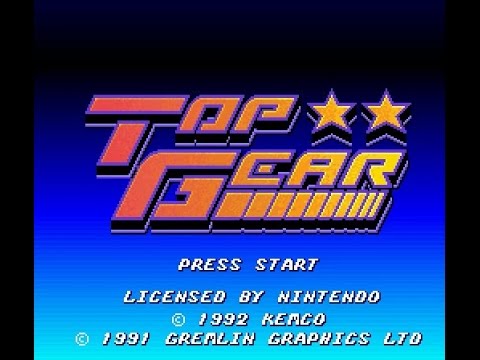 This is said to be Lotus Turbo challenge for the SNES, but their are no lotus cars in the game. No, the only thing in common with the lotus games is that its by Gremlin, ok and it has some tunes from the lotus games.

Lets say this is how Gremlin wanted the lotus series to progress (a newer version without the licencing). what does this have going for it. Music+SFX for one thing sadly missing frm the Lotus games (Amiga+Genesis). I also like that a few trans have a Day/Night transittion effect. The Nitros also come n handy at times.

The Title music in the game is a rendition of the the Lotus II Ending music. You had to work had to get to hear this tune on the Amiga/Genesis, but here it is on the title screen in this game. Not a bad rendition at all, and that goes also for the other Lotus tunes used in the game. However the snes blips and blops dont live up to the Amiga Original, but good all the same.

Now the bad. The game screen area is too damn small. Graphically …I dunno, but maybe the lotus games looked better, at least by LotusIII. The game is also too damned long, making it repetative to play in one sitting. The cheating ai can get real old at times making it near impossable to get first. Italy/Rome was easily the hardest track and took me many retries to beat it. Due to needing to pit, the front cars get too far away and even nitro doesnt help to much, even the AI racer struggles!

I chose the white car as it has high grip and low fual usage at the cost of overall speed. It made it difficult at time but being able to take corners without breaking much helps me alot.

And finaly a rant on literaly every old game, the ending is so damned unrewarding for the ammount of time put in!