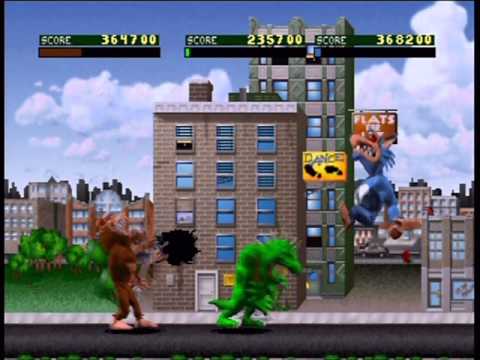 I was a fan of the original arcade Rampage back when I was a kid. I remember playing it at a nearby Round Table Pizza around the late ’80s/early ’90s. I have always been a fan of cooperative games, and Rampage was probably one of my earliest experiences with co-op gaming. I just loved getting my brother and whoever else to join me in demolishing buildings and eating people.

I think it was around 1997 that Midway released a new Rampage game called Rampage World Tour. It featured better graphics and music, new moves, faster gameplay and scrolling levels. I played it at another pizza place shortly after it came out and thought it was awesome. When I heard about the N64 port through Nintendo Power, I decided I needed a copy of the game.

I think I received Rampage World Tour for my birthday in early 1999 along with Yoshi’s Story. My friends came over that day and we proceeded to demolish buildings and eat people. Rampage certainly made my birthday a bit more fun.

Rampage can easily be called a mindless game. You either love it or hate it. I love it, but I only tend to play it with friends. Also, I tend to play it in short bursts, but this time, Luke, Michael and I got some beer and powered through the entire game – all 128 levels – in one sitting. The beer certainly helped.

We spent a lot of time kicking each other’s asses, but that’s what you’re supposed to do in this game. Giant, building-destroying monsters don’t play nice with each other. Either that or it was the beer. If you watch this entire playthrough I will be shocked.

In this first part we completed Days 1-31.

Recorded with the Hauppauge HD PVR and the official N64 S-video cable. I used a Toshiba model D-R550 DVD Recorder to upconvert the N64’s native 240p signal to 480i so that the Hauppauge could capture the console’s audio/video signal.