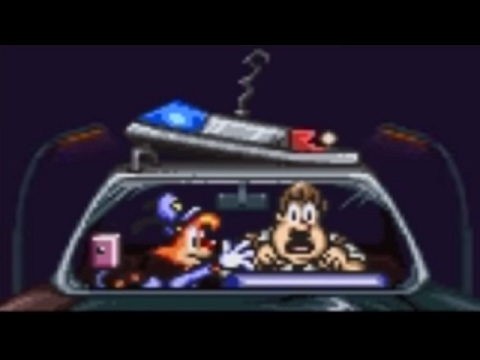 A playthrough of Capcom’s 1994 license-based platformer for the Super Nintendo, Bonkers.

Played through all stages and collected all of the heart containers.

I used to love the show Bonkers when I was a kid. My sister and I would watch it everyday after school, and that stupid theme song would get permanently lodged in our heads (to the point that we’d get yelled at by our dad during dinnertime for saying “Bonkers” in that weird burpy sounding voice over and over).

For those that don’t remember, it was about “Bonkers D. Bobcat” (wow Disney, super creative there), a bobcat police officer that always meant well and screwed up everything for his partner, Det. Lucky Piquel, who resented him at every turn. It usually played out like some kind of kid’s version of the interplay between Roger Rabbit and Eddie Valiant.

The game itself is pretty typical Capcom fare. It looks and sounds pretty nice, and has lots of fan service throughout – I was a huge fan of the secret room that had Donald and Mickey chillin’ while you grabbed a 1-up. It tasks Bonkers with finding Toontown’s treasures – the hat from Fantasia, Ariel’s voice from The Little Mermaid, and the lamp from Aladdin. The game play feels like a combination of the Mickey’s Magical Quest series and Buster Busts Loose – it’s hop and bop, but you also have a dash mechanic that allows you to plow through obstacles and enemies.

I certainly liked the game back then because of my love for the show, but now? I’m not so sure. It’s still a nice, wholesome, polished platformer, but it doesn’t really feel like it adds much to the games that came before it. It’s fairly formulaic, but still – if you like these types of games, and you’re a fan of Disney’s 90s cartoon line-up, you really can’t go wrong.

And this is for a request – sorry I don’t remember and can’t now find who requested it, but if you see this – here you go! 🙂
___
No cheats were used during the recording of this video.